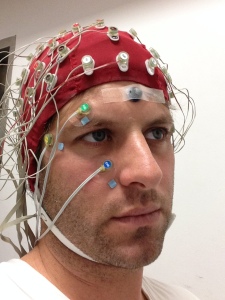 Volunteering as a participant for an experiment to gain valuable EEG training from multiple perspectives.

In 2010, I received my MA in Applied Linguistics from UCLA with the thesis: The Prosodical Son: Music’s Influence on the Evolution of Language, with Distinguished Professor John Schumann (chair), Professor Charles Goodwin, and Professor Emeritus Frederick Erickson. This project explored the role of musicality and prosody on the emergence of language.

In 2004, I graduated with a BA in Linguistics with a minor in Portuguese from UCLA. After graduating, I spent the better part of four years as an educator both domestically and abroad. I worked as a high school Spanish and English teacher, and I spent six months teaching English in Korea.

Additionally, I have spent extensive time living and studying in Brazil, Mexico, and Central America, and I incorporate both Spanish and Portuguese into my research and teaching.